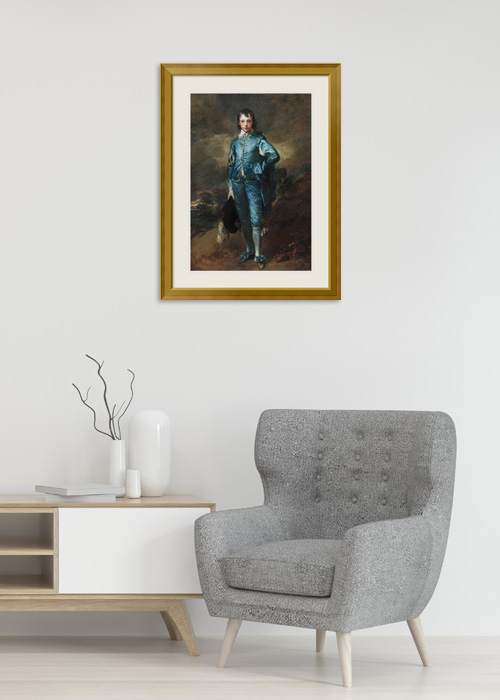 Blue Boy was Gainsborough’s first attempt at full length Van Dyck dress – knee breeches and a slashed doublet with a lace collar – which is based on the work of Anthony van Dyck, the 17th-century Flemish painter who had revolutionized British art. For Gainsborough, it was a way to show that he could match the elegance of the earlier court portraitist, who was as much a gentleman as his clients. Rather than a commission, it was painted for his own pleasure and as a demonstration of his abilities.

Though clearly indebted to Van Dyck, Gainsborough’s painting technique was entirely his own. Whereas Van Dyck applied color in discrete patches composed of short consecutive strokes, Gainsborough presents a chaos of erratic color and brushstrokes. At the proper distance, the diverse pigments crystallize into an illusion of solidity. Blue Boy did not seduce its first viewers with an image of a celebrity or with philosophical allusions, but with Gainsborough’s command of paint and the sheer mastery of his brushwork. 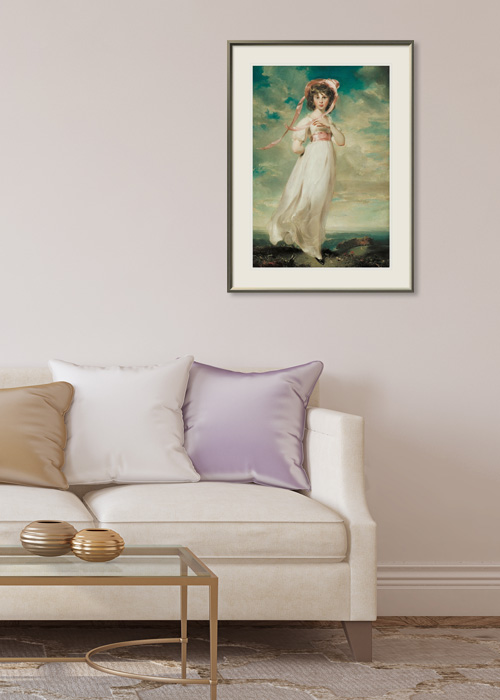 Judith Barrett commissioned this painting of her granddaughter to ease the pain of the child’s absence. Sarah, known to her family as “Pinkie,” was raised in the British colony of Jamaica before being sent to England for schooling. Mrs. Barrett requested that her granddaughter be depicted “in an easy, careless attitude.” With her right arm bent behind her back, her left arm raised in front of her chest, and her right toe pointed, Pinkie appears ready to perform one of the sophisticated dance steps she would have recently learned, demonstrating for her grandmother the civilized refinements she was acquiring in England. Lawrence’s use of a low horizon heightens the monumentality of this portrait of a young girl, who died shortly after the painting was completed. His idealized portrayal of childhood led to “Pinkie’s” international fame and iconic status. 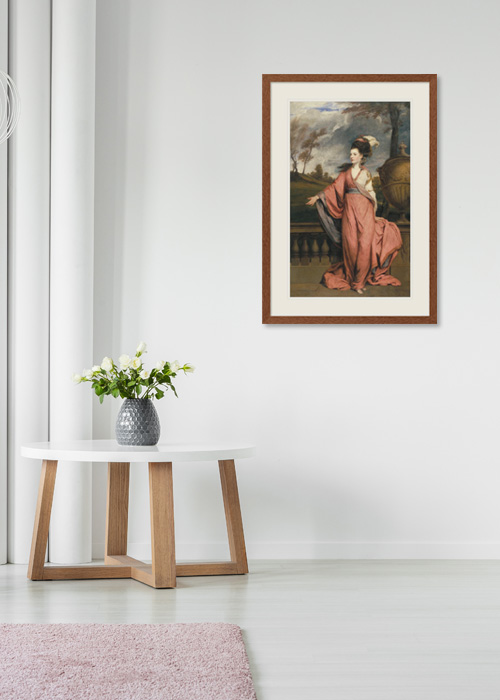 Reynolds combined several elements in this portrait: idealization and the theatrical presentation of his sitter, as well as references to contemporary fashion. To invest his sitter, Jane Fleming, with cultural authority, Reynolds modeled her pose on the Apollo Belvedere, a renowned sculpture from antiquity. The influence of classical imagery is also clear in the gown’s rhythmic folds of fabric and the Greek key pattern along its hem. Contemporary audiences would have recognized Jane’s outstretched hand and arm as a conventional theater gesture that actors assumed when about to speak. Reynolds also refers to contemporary fashion, depicting Jane’s hair ornamented by the ostrich feathers that the Duchess of Devonshire had recently made popular. 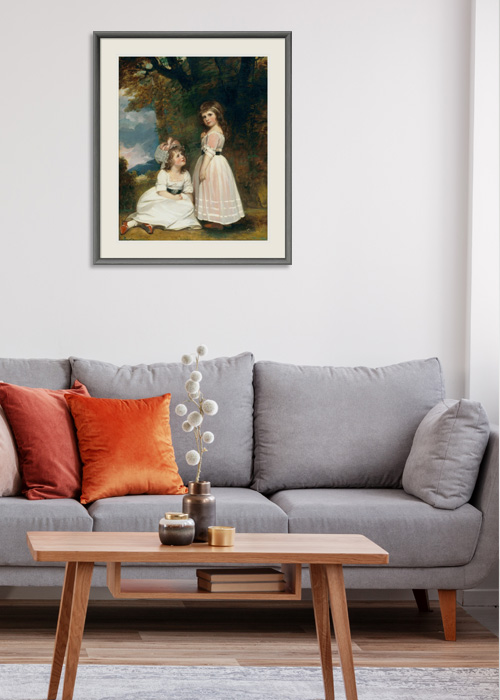 English family portraits placed a premium on birth order. Romney articulates the relative status of Margaret and Susan Beckford in a variety of ways. Elder sister Margaret’s erect stance, elegantly placed hands, and direct gaze signal her dominance and sophistication, while Susan’s upward glance and crouching posture express the admiration and dependency of a younger sibling. 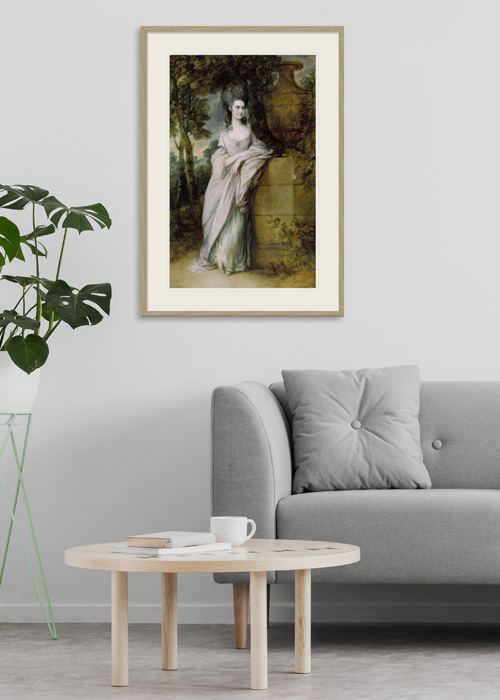 In the mid-18th century, British artists developed a distinctive type of portraiture known today as the Grand Manner. Like this work, Grand Manner portraits were large in size, and meant to demonstrate the importance of a family’s lineage. Many were hung in the formal rooms and hallways of great British houses. Henrietta Read’s grandfather, a wealthy brewer, commissioned Gainsborough to paint this portrait – as well as those of other family members – as part of a dynastic display. In a pose that recalls 17th-century court portraits, Henrietta drapes part of her lilac gown over a stone plinth, providing a cushioned support for her elbow and revealing her white silk petticoat. The pink, cream, and charcoal of her delicate gown admirably complement her complexion and dark hair color, and provide a striking foil to her bold black eyebrows and dark brown eyes. 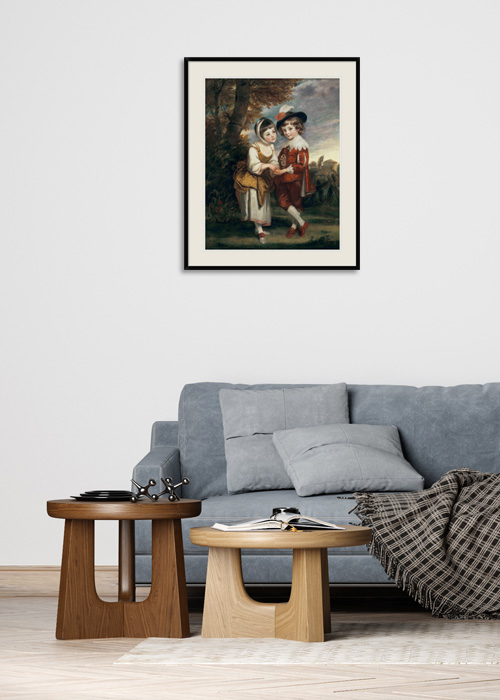 In his portraits Reynolds often experimented with the humorous potential of casting children in adult roles. Here, Lady Charlotte and her younger brother, Lord Henry, parody the popular subject of the gullible young dandy so distracted by the gipsy fortune teller that he fails to notice the theft of his purse. While Lady Charlotte perhaps reads the signs of prospective romance in her brother’s small hand, the viewer envisions the future eminence his aristocratic birth assures him. 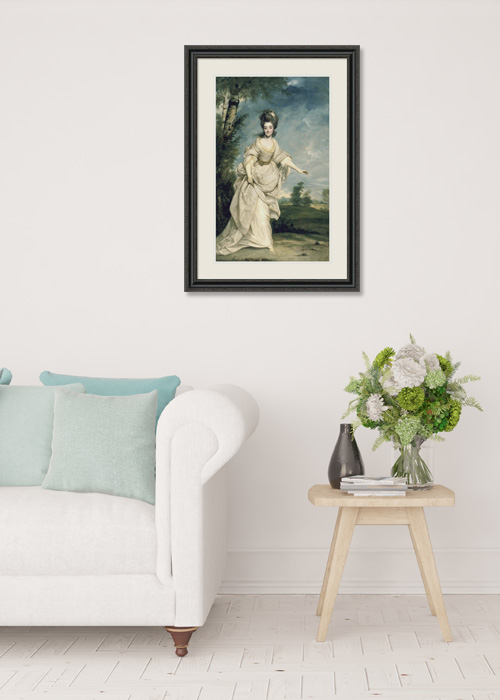 Diana Sackville’s mirthful expression, windswept tendrils, and spontaneous sense of motion convey an air of charming informality. Her casual elegance reflects a general trend toward naturalism that arose in the late 1700s, largely as a result of a relaxation of decorum in high society and the fashionable negligence popularized by Georgiana, Duchess of Devonshire, whose portrait hangs nearby. This painting was commissioned by Diana Sackville’s fiancé, John Crosbie, 2nd Viscount Crosbie, who, at 24, likely valued the chic emphasis on vitality and informality in this portrait of his future wife.